The Miracle Span team were very professional and thorough throughout the project. We will certainly be using them again and have no hesitation in providing this endorsement. — Bond Air Services Ltd

The workmanship of your staff in the office and on site was very professional and kept to schedule. Very satisfied and would fully recommend your company to anyone — MCH Coaches

Thanks Miracle Span for the help with our building. It was easy to put up, a bit like mecano, and if I was in any doubt you were there on the phone with help. — Superbike Services

We have been tremendously impressed with Miracle Span from the initial planning phase through to completion of our steel frame building. — Bath Golf Club 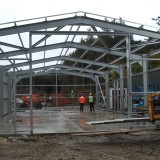 Excellent storage facility for local holiday park…… Miracle Span’s team supplied and installed a storage building to Lakeside Holiday Park, in North Somercotes, near Louth,  Lincolnshire earlier this year.  The Don Amott Group bought Lakeside Lido in 1985 and transformed it into one of the finest holiday parks on the East Coast.  The prestigeous resort […]

Miracle Span were contacted in Spring 2015 by Moss & Co, specialist timber merchants who wanted to relocate to a new, bigger premises where they needed to cover an external yard to protect their valuable timber stocks. The project was a huge undertaking for Moss & Co, who hold a Royal Warrant of Appointment as […]

SPRING 2014 : Miracle Span’s professional assembly team travelled to Ascension Island to erect a steel portal frame structure to be used as a vehicle cover to shelter vehicles from the hot sun. The steel frame has a span of 25 metres x 5.5 metres to eaves […]

SPRING 2014 – Miracle Span supplied and erected a portal frame building as an extension to an existing building for a building supplies company based in Uxbridge,  West London. The hot rolled steel structure formed the second storey of the building which had a brick built ground floor.  The end result was a new building […]

SPRING 2014 Miracle Span supplied a lightweight portal frame building from our MiracleLite range for a water & energy company based in South West England. The building is used to house waste water treatment plant.   Here’s an overview of the main features of the building:- The dimensions are 8.1 metres wide x 5 metres […]